skip to main | skip to sidebar

So many of your made these for Bryson while he was in the hospital. This was the first time he has looked at them in a couple of years. He loved it! A lot of people put on the card how they knew or had heard about him and that was really neat for him. He did say he should write cards back to all of you. :). I just love this kid. So this is my thank you from Bryson for the cards so many people sent for him five years ago. I'm so glad we saved these and hopefully your words will continue to encourage him in years to come. 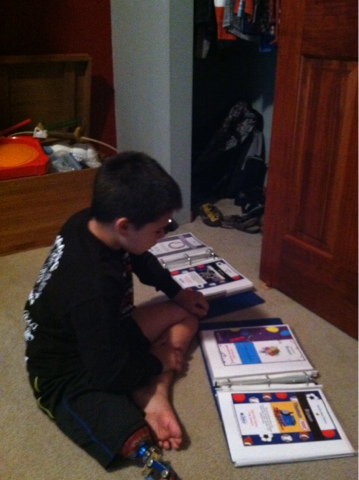 Riding Bike...Are you kidding me!

We have tried for a couple years now to get Bryson to ride a bike.  We figured it would be possible...someday...but it was becoming such a chore for all of us.  This summer we saw glimpses of him getting his balance but he just couldn't do it for very long.  Then finally last night this is what we saw...
We are not finished but I would say he has crossed a huge hurdle.  We have to figure out how to get him to be able to get on the bike, get his foot in place, and get started without our help, but I'm hoping he will instinctively figure that out on his own.  (If any of you have any ideas on how we might teach him I would be up for that.)  He can also only turn one way right now.  When he tries to turn the other way he falls.  All in all I'm pretty proud of my boy!  As with a lot of physical activities in his life it took him longer then most kids but this is just another stepping stone in his life that when he is struggling to accomplish something else he can look back and see that even with one leg he learned to ride a bike.   AMAZING!
(On a side note.  I know this blog is just about Bryson's journey, but for family out there, Reagan also learned how to ride her bike down the road last night.  I said ride, not break!  Right now she just falls at the end and hopefully someone is there to catch her:))﻿
Posted by Beau and Nicole Hummel at 2:05 PM 5 comments:

Email ThisBlogThis!Share to TwitterShare to FacebookShare to Pinterest
Labels: Bike

4 Years Ago Today and Look How Far He's Come

I have to admit, this was the first year that I did not dread this or even remember what it was the anniversary of.  It wasn't until this afternoon that I realized that my mother-inlaw's text that she loved us and was proud of our son made since.  In my eyes that is a blessing.  Yes, now I am getting teary-eyed remembering but what healing must be taking place in my life to get me to the point where I don't dread Aug 17th.

On that day all of our dreams for our son were shattered with the doctors words about amputation.  We thought of all the things (we thought) he would never be able to do.  Not in our wildest dreams did we imagine all that he would be doing today!

Are there still down days, hard conversations, and daily trying to have faith that God has a purpose for even this...yes, of course!  But thank God for his redeeming power in our lives.  That He continues to work in and through us and that I know He has and will continue to do the same with Bryson!

By the way, I do eventually plan to update all of you on Bryson's summer, especially Nationals, but I need to wait until I'm caught up from being gone on vacation for 2 1/2 weeks and the kids are in school!

Posted by Beau and Nicole Hummel at 1:13 PM 2 comments:

Email ThisBlogThis!Share to TwitterShare to FacebookShare to Pinterest
Labels: Anniversary of accident

The blog I wrote last week, really was from my heart and was really meant to be just another post about Bryson and the things that pertain to him.  I never dreamed that almost 9000 people would have read the blog in a week - that was not my intention.  In case you are not familiar with blogs, I can see how many people view my blog and what blog posts are being read.  (Don't worry, I can't see who:))  Before my post about coach Tressel, normally only about 30 people read my post - some family, some friends, and some other parents of amputees, and that's just fine.  But because of my post about coach Tressel and other people coming to the blog I noticed that almost 100 people have read my post about Izzy and I thought, "great, that means more people are praying for her now."

All that being said, I have another prayer request for all of you.  I had a friend from KY who emailed me last week about a family who also live in KY.  Their two year old daughter was run over by a lawnmower last week, I think, and she did not survive.  When I heard the story, my heart broke again.  These tragedies with children will never get easy for me.  I sat in shower again, which was always the place where I allowed myself to cry during the months after Bryson's accident, and cried for the family and also cried as a relived all of the feelings I felt that first night.  I know the pain and grief I felt cannot compare to this family's.  Please pray for this mother, father, and the 8 year old brother. (I think that's the right age)  I left the story pretty vague on purpose.  I have emailed the mother, but I don't really expect to hear back from them anytime soon and maybe not at all, so I don't really feel like I have permission to give any details.  You have enough there to be able to pray though.

Like I said, I have emailed the mother and I did leave her a the link to this blog, so I thought it would be nice and encouraging for her (if she reads this) for you to leave your own prayers for the family in the comments to this blog.

Thanks for praying!
Posted by Beau and Nicole Hummel at 5:08 PM 9 comments:

You won't be able to read or hear about this story on ESPN, Sports Illustrated, or the Columbus Dispatch this week.  You see there is nothing, as a fallen people, that we like better than a story of a good man who also has fallen - sad isn't it.  (Believe me, I know from personal experience!)  We get a weird sort of pleasure reading about it, listening to all the details, and then making comments about it to our friends, family, and posting comments about it all over the Internet.  Twisted - I know, but think of how many times we participate in this.  Well, this is my blog and I've decided I'm going to do something different.  I'm not going to condemn anyone, but I'm also not going to excuse anyone.  What I really want you to see after this blog entry is that our legacies do not have to be defined by our failures, our sins, our mistakes despite what some TV commentator might say, but they can be defined by the grace of God working through us day in and day out.

Well, in light of that, I would like to remind you or maybe tell you for the first time my story of Coach Tressel and the legacy that he will carry in my family.
On Aug 17th my son was run over by a lawnmower.  It just so happened that on that day Bryson was wearing his brand new #33 jersey.  Bryson was probably the biggest 4 year  old OSU football fan ever and was so excited about his new jersey.  In fact, his dad had on a matching jersey.  Turns out his daddy used his jersey to tie around Bryson's leg to stop the bleeding and Bryson's jersey was cut off.  While I was in the emergency room with Bryson before he was life-flighted to Columbus Children's hospital he let me know that he was upset about his new jersey.  I assured him we would get him a new one, but never did I dream how things would turn out for him.
﻿ ﻿
Bryson had his leg amputated and then spent quite a bit of time in the hospital as he healed.  During that time, through a series of events that I'm not even sure of, Coach Tressel was made aware of Bryson's accident and his love for the Buckeye's.  It wasn't a couple of days later and Coach Tressel came to meet Bryson in person.  He came alone: no cameras, no media, no support crew.  He came. He encouraged. He let us tell him Bryson's story.  He let us take his picture with Bryson.  He gave Bryson some signed hats and a covered note pad.  He promised to get Bryson to a OSU football practice and to an Ohio vs Michigan game (since that always falls on the weekend of Bryson's birthday).  All of that was great, but what left the biggest impression on me was when he handed us his business card and wrote his personal cell phone number on the back.  He told us to call if we needed anything - are you kidding me!  Who does that!  I will tell you - not somebody who is only interested in lining his pockets or winning football games.  We were of no value to him, my husband is a youth pastor, we don't live in Columbus, & we aren't alumni of the university.  We were just a hurting family who he took time for, in the middle of football season, to encourage. 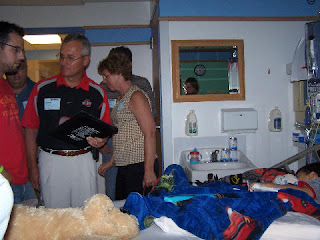 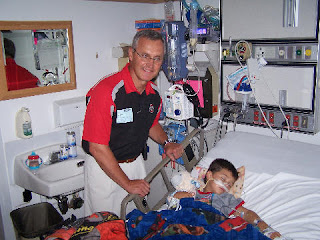 He fulfilled his promises to Bryson.  Bryson was able to go to two OSU football practices and went to the Ohio State/Michigan game the next year and sat in the most amazing seats.  On the notebook he gave Bryson he wrote, "The Buckeyes are cheering for you."  Bryson was very impressed by that.  While watching the football games even now a couple years later Bryson will say, "That's Coach Tressel!  That's my friend!" 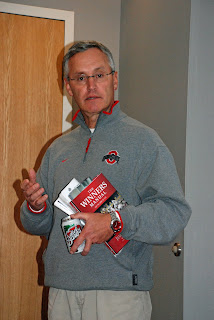 ﻿ ﻿
So, Coach Tressel's legacy in our family will simply be this that he was an encourager when we needed encouragement, was compassionate when we needed compassion, perfect - NO (but really who of us is), and to Bryson "friend."  I'll take that kind of legacy any day of the week.

On a side note, random people have asked me how Bryson is taking all of this (knowing what a big fan he is) and I will tell you this, he is just sad that Coach Tressel won't be coaching the Buckeye's next year.
Posted by Beau and Nicole Hummel at 9:19 PM 37 comments: